Fall is my most favorite time of year… and my least favorite. As the holidays approach, the recollections and flashbacks of my stroke are forceful, and re-living it again from a distance becomes reality. So much so that it make me cry at times. It’s not self-pity so much (anymore), but the memories, sensations, and emotions of being sooo weak and sooo helpless are sharp and sorrowful still.

As many of you who have followed me in this stroke pilgrimage know, it happened on Thanksgiving Day. It had been a stunningly beautiful Autumn ? that year. Almost like Father was giving me a sweet gift before it happened. That was just shy of 4 years ago now.

I don’t want to dwell on it overly much, but there’s a certain cleansing, freeing feeling that comes with the reliving of it all and writing about it— and then putting it in the past all over again. ? Plus, this way I’ll have a record of my improvements all along the way. There’s been a couple of new happenings this year, but mostly just smaller “refinements” of previous accomplishments.

In no particular order…… here we go… ☺️

● Driving
I started driving again in traffic, at least a little bit. Up til this year, I’d only driven out in the country or in our little town up the road (which isn’t exactly challenging traffic-wise). But this last year I took to driving once a week, each Saturday morning, to go into the farmers market where we have a booth. It was kinda rough the first couple of times, but it came back quickly. Like the proverbial bike. Mostly anyway.

There are some differences. One of the effects of the stroke was spatial. (Go ahead, say it. Lol. ? Yes, I’m “spacey”. ?). I have troubles with strokeyness (which is more or less, dizziness and hesitation— I’ve never been able to define it well so others can understand) in “big” areas. Like a big store or a big restaurant. Well, unexpectedly, driving over bridges or valleys, where the landscape sorta fell away, made me feel the same way.

I talked my way through it and focused away from it, and after a few times my brain adjusted. In one sense it was almost easier driving in traffic cuz it kept any “bigness” at bay with cars and buildings on either side. As I gain mastery over pushing away the strokey feeling it may become possible to handle more traffic, but this is one area to be very careful about since the safety of others is at stake.

● The Cane
Another accomplishment this year was with my cane.. or, er… without it. I walked completely around the farmer’s market this year for the first time without it (several times this season). For those of you who’ve never been there, it’s situated in a small-medium sized park. A normal day would see 1000+ people come through. I wasn’t brave enough for that, ? but during slower times, with not so many people, I felt comfortable to branch out.

I’m getting comfortable enough to do that in the grocery aisles and other places. Not a lot, but enough that I’m not confined to cane use 100% in public. I don’t use it at all at home now, and pretty much don’t need it in the kids’ homes (even around the grands and all their toys scattered around), or in other low-key places. I don’t use it on my walks either unless it’s muddy outside. Having cars drive by kinda freaks me out for a second when I don’t have it, but almost everyone on our road slows way down as they pass by me.

● My Lame Stroke Foot
For whatever reason, my right foot came back a few weeks ago. At least partially. I can tell I’m walking on it more the way I should (on all three points of the foot instead of only 2, if that makes sense). Still hurts almost all the time, but for a couple months now the pain is 5-7 instead of 8-9. I’m hoping this will mean the atrophy (lack of muscle mass) in my leg will reverse itself in time.

Recently, I’ve been seeing a chiropractor to help with my foot and she was able to release the bones in my toes and identify some problem areas in my forefoot just by feel. I went to her just a couple weeks ago, so we’ll see how it continues to go with her. Might be something good to report on for next year…..?

● Balance
As I’ve said before, I never “feel” steady, but it’s another one of those things that I’ve learned it’s better to focus away from it and not give it place in my thoughts. From the beginning, I’ve felt like I was tipping over, and still feel that, but I’ve had enough experiences now with tripping, slipping, being run into by over-eager, over-loving little children and big dogs who love to lean and be scratched, to realize that I’m actually a lot steadier than I “feel”. It doesn’t “feel” like I’m steady, but I would guess my balance is better than I think. So “feelings” do lie at times.

Beyond that, it’s become much easier to step over things in one motion, to go through narrow passages (like between toys), and even turn around in a more natural way. I was turning around making 18-point turns (ok- maybe just 10pt turns), and I’m working up to doing it in one motion now the way “normal” people do. My main trouble there is that sense of tipping over as I swing around, so if I ever learn to ignore that altogether, I think I’ll have it.

This is one of those things they tried to teach me in physical therapy. I couldn’t get it and couldn’t get it, but it’s coming back on its own. I totally understand why the therapists try to encourage these things and push a person, but God has his timing. I could practice what they showed me a million times with nothing happening, but when it’s time… it’s there.

● Standing
Last year I reported that I’d isolated the muscles needed to accomplish standing up from a seated position. I still can’t stand up “normally” from a low chair without pushing off with my arms, but I can do it from a little higher. So I’ll keep working on it.

● Cognitive and Social
I think these areas have seen the biggest improvements this year. I just feel more normal interacting with people again. I still have troubles with not being able to feel my way through logical thinking as I’m explaining things, and feeling insecure about it, but even that has diminished a lot. My organizing ability has improved too.

Realizing that others view me as normal is both daunting and comforting at the same time. If I’m seen as normal, then it feels pressure-filled to do more than my mental handicaps actually allow. I can usually tell when I need to bow out by when I get strokey. (That strokey-ness has become my boundary in much). Yet being seen as normal is comforting too in that I’ve improved enough that the mental handicaps aren’t noticed outright anymore. I still have off days, but then, we all do. And I’m still the introvert, more at home in writing than talking, and that’s probably never going to “get better”. Lol.

● Voice
For the most part the monotone from the stroke is gone, but it comes back out when I’m tired. I still know my voice is different, but I’ve adjusted to it. The part that’s still frustrating a bit to me is that no one can hear me. I’m constantly repeating myself. I’ve always had a softer spoken voice, but it’s still really really soft. Most people can’t hear me. But …you know.. when I think about it, most people aren’t listeners anymore. When I think of the people I talk to on a regular basis, they’ve adjusted to me. They want to hear me and so they listen more closely. So, while I still want to work on adjusting my volume to other’s hearing needs, I feel okay about not taking full responsibility for others’ not listening well. ?

● Neuropathy
The electric feeling of the neuropathy all along my left side has gone down a little bit more. I was able to tolerate fans (on low) again this year, even when sleeping, which is a BIG “YAY!” and made the summer much nicer. Changes in air pressure and temperature still make it flair, but not near so painfully. Thunderstorms with lightning are still uncomfortable, but not all the time. As well as electronics that touch my left side. It still feels very cold all the time, and winter time isn’t always fun, but maybe that will be better this year too.

● New Peeps
God has brought a couple wonderful people into our lives, both of whom have had strokes. It doesn’t make me happy that they hurt, but it does make me happy to have people in my life that understand what I’m talking about and to be able to encourage and be encouraged.

● Going back to school
This is the last “big” event of this year; the decision to go back to school to become a certified aromatherapist. Very stretching with my focus and organizational deficits. (It’s real school and not a junky online course). But very good to have to figure out with the Lord’s help. If all goes well, there may be more school ahead. But one step at a time.

Well, I guess that’s about it. When I think back over these last 4 years, I’ve seen a lot of death to me which has been extremely painful. ? Death always is. But as God reminds me each Autumn, death can also be stunningly beautiful. “Precious in the sight of the Lord is the death of his saints”. Psalms 116.

What happened to me was horrible. But it’s been precious to him.

A whole lotta Life has come out from my stroke. ? I look at the outward things he took but, like Job, my inner eye has seen stunning and amazing things of our God that I never would’ve expected. Not in a million years.

The stroke took much, but so much has been given in exchange.

The memories of my losses may grieve me still, ? but my gains are like the glory of the sun (Son) shining upon my Autumn sorrows. ? 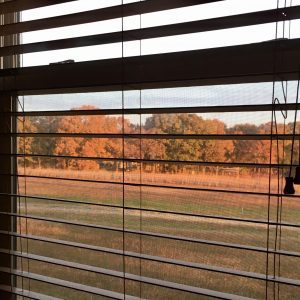 To read my story from the beginning visit: My Stroke Story