Been thinking about the disciples lately.

The Greek word for disciple means “student”.
Jesus was constantly teaching them. Constantly stretching their ideas and concepts of Himself and God.
He walked with them, but was foreign to them.
He talked with them, and was their friend, but they understood so little.
He was so “other” than they were.
Because of His being so “other”, so different than they, to follow Him was a challenge of some sort everyday.
There were times when they rested with Him and were comfortable with Him, but often they were 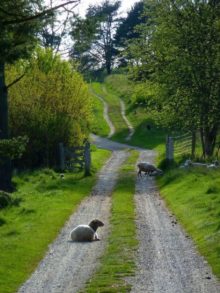 uncertain, fearful, and sometimes even frustrated with why He was doing what He doing.
This is us too, isn’t it?

And every time they thought they understood and thought they were certain they knew, He did something to show them how little they really did know. Sometimes a failure would then come to humble them. More frustration, fear, and uncertainty.

You know, there DOES come a time where we DO enter into (a certain amount of) understanding… but only AFTER a stretching process, and often a failing process, and challenges given to us where He proves Himself faithful and we learn…

We look at them and say, “Yeah, but that was before they had Holy Spirit. It was different for them after.” True. But they’re still a picture of the process of being a student. Theirs is still our process with Christ. They are us. And we are them.

And if we won’t take the cross He brings in each challenge, and trust Him that He knows exactly what and how much we can bear, then we can’t be a disciple of His. That’s not a dire prediction. It’s just a simple and quiet statement of fact.

If we’re not willing to go thru the hard stuff of Life with Him, learning Him in the process… accepting the challenges of entering into Him with the uncertainties and questions and waitings and trials …then we can’t be His student. Not because He doesn’t want us to be, but because …we won’t.

So, trust Him. Look to Him in whatever you’re facing. Walk by faith and not feelings. Listen for His Voice in your spirit. He’ll be the Light in your darkness. Learn these things. Step into His school.

“Take My yoke, and learn of Me, for My heart is lowly and humble as I teach you. Trust the yoke, trust My heart even when My teaching of you doesn’t make sense, even when Life is hard, and you will find Rest for your souls.” -Jesus (paraphrased)

“For My yoke is easy and My burden is light.”