***edited to add that I now just buy a green bag of Whole Earth Erythritol from the sugar aisle at Walmart and add 3 scoops of this monkfruit from Amazon.

As some of you may remember, I’ve begun the Trim Healthy Mama plan for eating. (If you don’t remember you can read about it here).

I’ve been on it since March or so. I’ve lost 20 lbs so far (give or take 5 depending on water retention and the time of the month). Most importantly, my body has healed enough that my diabetes numbers are now solidly down to a low pre-diabetic range. Also, my blood pressure is down and near normal. I’m close to my first goal weight, with a normal weight range in sight for the first time in well..  goodness… years.

Anyway, back to Stevia. It’s big on that plan. And with good reason. It’s an economical, all natural substitute for sugar. No aspartame. No sucralose. Yes, it does have an aftertaste to some folks, especially if they’re just coming off sugar. But, if one sticks with it, it’s entirely possible to get used to it.

I’ve used it for years. And years. So when I started THM it wasn’t a big jump at all for me to get used to stevia. My fave sweetner on plan was Pyure, an erithrytol and stevia mix (which you can find it at Walmart).

But, for years and years, I’ve struggled with allergies.

And, through the THM online groups and others talking about their allergy to stevia, I finally made the connection (?) that it has been stevia that was causing my allergies. For years and years.

So I experimented and stopped using stevia, and sure enough, my runny, drippy, congested-y nose cleared up. Like almost overnight. It was amazing.

I was thrilled to not have to deal with it anymore. But sad cuz I’d learned to like stevia over the years and would have to find an alternative to follow Trim Healthy Mama.

Enter my DIY version of THM’s Super Sweet Blend. Many ladies in the groups talked about monkfruit as an alternative to stevia. It’s available in stores as Monkfruit in the Raw, but that brand has dextrose in it which is a form of sugar. Which isn’t helpful to the blood sugar. So, I went to Amazon searching for something better.

I finally found a monkfruit that was entirely pure from Julian Bakery. No additives. No fillers. True, it was $29.99 for 3.5 ounces, but it was only $5 or so more than the pure stevia I’d been buying and using. You only have to use a small amount (tiny really) to get a big sweet effect. So, I went for that, and was very happy at how sweet it was and how little I could use to get the same sweet I was used to. The color and taste was more toffee-ish than I prefer, but I could live with it.

I then also wanted something I could bake with that was similar to Pyure. There’s a number of THM do it yourself sweetner mixes out there. The THM stuff is really not badly priced, but it all uses stevia, so I needed to come up with my own. Needless to say, there wasn’t any monkfruit sweetner recipe anywhere. So, I had to experiment.

I bought some erythritol from Vitacost. We LOVE Vitacost for about everything and have been customers for years. And I ordered some xylitol** off Amazon (mainly cuz I had some kickback on our Discover card which made it free). I wouldn’t have had to use xylitol**, but I knew I liked the taste of it from eating Spry mints over the years. I wanted to be wise though, cuz it has a little more calories than erythritol and can spike your blood sugar a little easier. So, I wanted enough to get a better sweet taste without overdoing it. When purchasing both, I looked for non-GMO since they’re both derived from corn.

I landed on the Vitacost brand of erythritol and the Zint brand of Xylitol**. They both are a more fine granular texture like Pyure and so I wouldn’t have to grind it unless I specifically wanted it powdered. I also ordered the Lakanto brand of monkfruit sweetner. Just a small bag so I could have an idea of the taste. Going off that, I came up with:

It’s perfect! And tastes much the same as the Lakanto brand. It bakes really well. I used it just the other day in Briana Thomas’ donut recipe. It’s very similar in taste and texture to Pyure. I’d say, in my VERY non-expert opinion that it’s 1:1 for sugar, and comparable to Super Sweet in THM friendly recipes. I’ve never used Super Sweet, but that’s how I used Pyure and how I’ve been using my own monkfruit blend. I’ve used it in cookies, mug cakes, smoothies, shrinkers, frappas, chocolate milk, my morning coffee, and all things THM and otherwise. 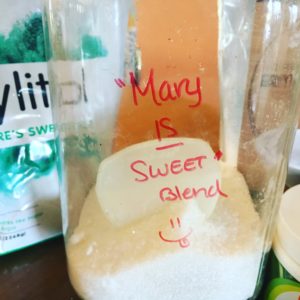 I originally was calling it “Mary’s Sweet Blend”, but I changed it to ‘Mary IS Sweet’ Blend just to tease my husband. He, of course, rolled his eyes at me. Lol. I told him that was better than ‘Mary IS Grumpy Blend’. He said that one was more honest. ? He was kidding of course. ??

So, then, I guess that about wraps it.

Goodbye Stevia. I will miss you.

You were a good friend while it lasted, but it’s over now. ?

**Xylitol is TOXIC to pets. Please use with much caution if you have animals in the house.

4 thoughts on “Goodbye, Stevia; You Were a Good Friend, But it’s Over”