It was grocery day. Not sure why, but I said a lil prayer before we left, asking the Lord to make us a blessing to someone as we were out and about. Of course, what flashed through my mind was pictures of helping someone along the road or some other big thing. How he answered it was completely unexpected. But so so sweet. 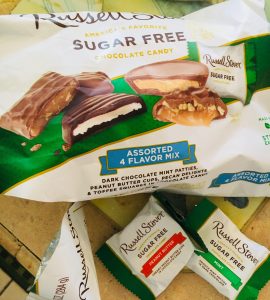 I have to back up a bit to explain. Chocolate. Sugar-free chocolate. Sweetened-with-stevia chocolate. Won’t-spike-my-blood-sugar chocolate. Very yummy chocolate.

I had made that discovery last grocery day, but had shared a lot of the bag and so was completely looking forward to getting another and keeping much of it for myself.

Well, we were walking out of the grocery, and to get to where we were parked we had to cut though the little shaded sitting area. There was an older lady, maybe going on 70ish, sitting there by herself. She smiled a bit as we passed, and I asked her how she was doing as we often do without really thinking. She smiled bigger and that made me feel good. But… to be honest, I was still mostly thinking on my own stuff. (Like ..candy ☺️).

As usual, my lame stroke foot was hurting after being on it for so long, so my normal routine is to sit on the far seat in the sitting area as my husband loads the groceries into our nearby vehicle. But too, this time I had chocolate on the brain. Sugar-free chocolate…. Very yummy chocolate.

So with great anticipation, I grabbed the bag of candy and sat down. It was a fair distance to where she was sitting, and I couldn’t hear her real well, but she complemented me on my husband who was doing a lot (ahem.. all ?) of the work while I sat. I unashamedly agreed with her as I worked to get the bag open.

She then asked me (shouted) where I was from, and we found out her husband, who was gone now, was from the same place. By this time, I was indulging in a piece of yummy chocolate. I was thinking on offering her some, when out of the blue she asked me (shouted) if she could have one. I said sure, and so she came and sat next to me.

We chit chatted (without shouting) about our mutual knowledge of the town where we live. She asked me about church and various people she knew from there. Then she again, out of the blue, asked if she could have some more candy. I’d noticed she didn’t have many teeth and had a lil trouble with the one candy I’d given her, so I fished out a softer one from the variety in the bag. By this time my husband was done. So I left her with a third candy, asked her her name, squeezed her hand, and told her I’d pray for her.

It wasn’t until later that I realized the whole thing was God answering my prayer to be a blessing to someone. It still makes me smile to think on how Jesus cares about something sooo small. Here I was expecting something big, but it’s just like him to sit and chat with a lonely senior and share some chocolate, and make her day happier.

Course, I’m still not gonna get much chocolate… but that’s okay. He owns the cattle on a thousand hills… and there’s got to be chocolate factories on some of them.

If you’d like to see some of the natural products that we sell, please visit www.jordanscrossing.net/store
Share this: